Returning to History: Exploring the tradition of Chinese ink painting on silk

In 2013, I was invited to have a solo exhibition in the city of my birth, Taipei. I had titled the exhibition Origins, as during the preparations for the show I felt the significance of a return to the place of my origins. Though I was born in Taipei, my family moved to Australia when I was 10; so I was brought up with predominantly Western education and ideals. However, as I became older, my appreciation for the Eastern part of my identity grew. I became interested in exploring the different influences of the East and the West on my artistic practice.

I had predominantly worked exclusively with oils up until this point; making large, atmospheric abstracts that invoked a sense of space and experience. Over the past two years, however, I have also been exploring the medium of ink painting on paper. The paintings that resulted are driven by an interest in meditation, in the Eastern traditions of working with inks, and in the Chinese calligraphic philosophies. They are an exploration of the polarities between the Eastern philosophies and the Western ideals; the heavy, slow, considered way of working with the oils verses the quick, light, intuitiveness of the inks. I experimented with thinning the oil paints down until they were the consistency of inks, and increasing the texture of the inks until they were heavy with pigments. 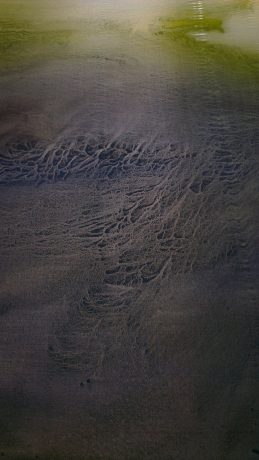 After arriving in Thailand and seeing the beautiful Thai and Cambodian silk around me, I realised that the history of ink painting actually began prior to the invention of paper, the latter of which occurred around second century AD. One of the earliest surviving Chinese ink paintings is a silk painting dated around 165BC.  This discovery embarked me on a journey of researching the tradition of Chinese ink painting on silk, and exploring the medium of silk in my own studio. 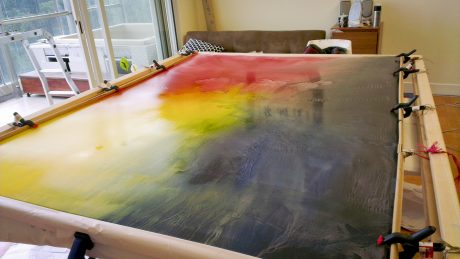 The resulting experiments are certainly no short of fun or challenges. I look forward to presenting some these works in my next Taipei exhibition in August 2015. 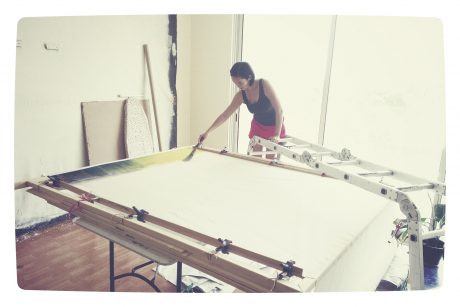